Watchdogs Cooking Up a New 'Problem'

In a “shocking” discovery Citizens Against Government Waste (CAGW) reveals that members of Congress have found “alternatives” to finding funding for their “pet projects” and The New York Times dutifully reported on it.

Using a Freedom of Information Act (FOIA) request CAGW discovered a letter from anti-earmark Senator Mark Kirk (R-IL) who lobbied the Department of Education to release money earmarked by the bureaucracy for a school district in his then-House District.

This is reminiscent of a study a few months ago by the Center for Public Integrity that we commented on here and here.

Then, as now, we pointed out that, especially given their new level of transparency, earmarks were a superior option for funding local projects, from a democratic point of view.


• Transparency increases the likelihood that the project request is available for public scrutiny; interest groups and individuals do not need to wade into the dark recesses of the bureaucracy, FOIA requests in hand, to identify member requests.

• Earmark requests promoted by members of Congress allow for a level democratic accountability that is absent in the bureaucracy. We the people can punish members for “stupid” earmarks or reward them for being responsive to local needs.

As long as earmarks (in their current form) are banned we can expect more reports like this, despite the fact that members of Congress have been hounding the bureaucracy about funding issues on behalf of their constituents since the bureaucracy began spending money.

Furthermore interest groups that previously relied on ginning up animosity toward earmarks to raise money from an outraged public needs to promote these stories to maintain their fundraising efforts. It takes a lot of money to clean up government. How can you raise money when you’ve “solved” the problem (earmarks) that previously buttered your bread?[1]

And the news media will continue to report on these “shocking” revelations—and helping interest groups raise big money—because the stories are consistent with a narrative understanding of members of Congress as inherently hypocritical and obsessed with reelection.

All this and the only casualty is a part of our American democracy.

[1] The degree to which CAGW can go to raise money is well documented. For instance see Bill Adair “For price, watchdog will be an advocate” http://www.sptimes.com/2006/04/02/news_pf/Worldandnation/For_price__watchdog_w.shtml Accessed December 30, 2010.
Posted by Scott Frisch and Sean Kelly at 1:29 PM No comments:

Cheese Factories in the WaPo

We were a "little" pleased to get a mention by Washington Post blogger Ezra Klein who noticed the interview with Jamelle Bouie of the American Prospect.
Posted by Scott Frisch and Sean Kelly at 10:48 PM No comments:

Are Earmarks Like Pornography? A Few Results from an Internet-Based Survey

As the FY 2011 appropriations cycle becomes white hot, controversy over earmarks once again surfaces, presenting one more sticking point for passing an omnibus appropriations bill. Earmark foes are demanding that earmarks be stripped from the omnibus or the president should veto the bill and demand that the earmarks be expunged.

Reporters have again dutifully taken the bait and are writing their obligatory stories ridiculing select earmarks that are included in the bill (while failing to do any research into the earmarks to determine whether they might be justified).

Where would the American public be without the media pointing out these “pet projects” for us?

According to Ronald Utt of the Heritage Foundation, we do not need the media’s help. He argues that:


In at least one way, earmarks are like pornography: There's no universally accepted definition. Potter Stewart, a justice on the Supreme Court, famously said of pornography in 1964, ‘I know it when I see it.’ Well, most Americans know earmarks when they see them.[1]

Critics of earmarks extol the virtues of government expenditures determined through competitive, neutral, bureaucratic processes. “Peer review,” for instance, is held up as the gold standard for determining project funding. The National Science Foundation and the National Institutes of Health, which rely on panels of experts to objectively judge research proposals, are held up as prime examples of how projects should be funded.

If “most Americans know earmarks when they see them” they certainly will know an expenditure determined through a competitive, neutral, bureaucratic processes when they see it too.

We were curious: Provided with examples of earmarks and bureaucratically determined grant projects will individuals be able to consistently distinguish between the two?

Given the constant drumbeat of negativity provided by “watchdog groups” and the media, will individuals consistently conclude that spending driven by bureaucratic decisions are consistently “better” (i.e., less “wasteful”) than earmarked expenditures?

To partially satisfy our curiosity we conducted a non-random internet-based survey. While the results are not representative of American public opinion, they are suggestive.[2]

Respondents were given a short description of a real project and asked to identify it as either an earmark or a bureaucratically determined project (see Figure 1). The wording of our items is specifically intended to present information about the earmark outside of any particular “frame” of reference that indicate what kind of project it is, or that will bias individual evaluations of the earmark, that is, whether it is “good or bad.”
Do respondents know an earmark when they see it?

In short, the ability of individual respondents to distinguish between earmarks and projects determined through neutral, bureaucratic processes is far from perfect; in fact, it is only slightly better than the flip of a coin for the majority of our respondents. 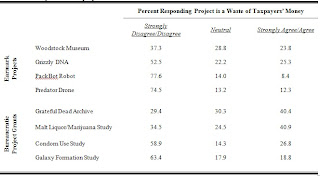 Overall none of these projects mustered a majority of respondents who agreed or strongly agreed that the project was wasteful. The two projects that came closest to a majority were bureaucratic projects not earmarks. The two projects that were judged “least wasteful” were earmark-related projects. Based on the judgment of our respondents it is not the case that earmarks are consistently more wasteful than bureaucratic project grants.[3]

Furthermore our results (not shown) indicate that those respondents who correctly identified a project as an earmark were more likely to agree that it was “wasteful.” In sum, in the minds of our respondents earmarks are not equated with profligacy.

When asked to choose between funding the Woodstock Museum (an earmark) and the Grateful Dead Archive (a competitive grant-funded project) a stunning 85% of respondents chose the Woodstock Museum. This is even more stunning since the $2 million earmark for the Museum—sought by then-Senator Hillary Clinton—was so effectively ridiculed by earmark (and Clinton) critics as spending taxpayers’ money on a “hippie museum” that Senator Clinton requested that the earmark be stripped from the appropriations bill of which it was a part.

What do we make of these results?

We need to repeat, once again, that the results presented here are based on a non-scientific sample of opinions; they should not be construed as representative of broad public opinion. They do suggest, however, that public opinion surrounding earmarks deserves some attention.

Perceptions of public opinion on the issue are largely built on media coverage of activated opinion, the views of anti-earmark members of Congress, and Washington-based anti-earmark groups. Yet in a rare data-based finding the Pew Research Center reported that 53% of Americans were more likely to vote for a member of Congress with a record of bringing government projects to the district; only 12% were less likely to vote for such a member and 33% said it made no difference.[4]

Politicians seem to posses some special insight into what the American public seems to “think” about earmarks. Announcing his change of heart on earmarks and his support for a Senate Republican moratorium on earmarks Senator Mitch McConnell said that by continuing to pursue earmarks the “..Democrats are ignoring the wishes of the American people.” President Obama said shortly after the midterm elections that he was “a strong believer that the earmarking process in Congress isn’t what the American people really want to see when it comes to making tough decisions about how taxpayer dollars are spent.”

Based on the Pew finding alone anyone who purports knowing what Americans “think” about earmarks is just dead wrong. If public opinion is half as nuanced as our small survey suggests anti-earmark politicians may be overplaying their hands considerably.

[2] These data are the result of a non-random sample of individuals responding to an internet survey. The sample was generated via social networking sites including Facebook and Twitter, and through other traditional word of mouth techniques. The results of this non-scientific survey are not, and should not be, represented as indicative of American public opinion; they are, however, suggestive of patterns that might be emerge from a larger, more sophisticated scientific survey.

[3] On our scale, which ranged from 1 to 5 (strongly disagree to strongly agree), the earmark projects had an average score of 1.72 compared to 2.75 for the bureaucratic projects, indicating that the earmarks had more support on average than the other projects. This difference is significant at the p < .000 level (t=12.45).

[4] In our study 30% of our respondents report being a little or much more likely to vote for a member of Congress who pursues earmarks compared to 18% who are a little or much less likely to vote for a member who pursues earmarks. In our sample 53% of respondents report that the pursuit of earmarks would not influence their vote choice.
Posted by Scott Frisch and Sean Kelly at 7:36 AM No comments:

Cheese Factories on The American Prospect

Sean did an interview with Jamelle Bouie of The American Prospect about Cheese Factories on the Moon. It appears today on their website.
Posted by Scott Frisch and Sean Kelly at 7:34 AM No comments:

Just having a little fun between meetings today. We took the text of our entire manuscript and entered it into Wordle (http://www.wordle.net) and generated the word cloud to the left.  If you did not know that our book was about Congress and earmarks the word cloud tells the story.  Try it yourself; it is a lot of fun.
Posted by Scott Frisch and Sean Kelly at 2:15 PM No comments: